"We’ll show the world we are prosperous, even if we have to go broke to do it."
-Will Rogers, American actor and political humorist (1879-1935)

The third quarter of 2020 began with markets rebounding smartly, a condition similar to what we observed during the second quarter. Significantly stronger-than-forecasted economic data further buoyed risk asset prices. As shown in Figure 1, all major benchmarks of the various markets and asset classes posted robust gains during the period. Rather than following the pattern of a typical economic recession, which tends to last several quarters or more, COVID-19’s economic effects have more closely resembled the results of a natural disaster—quick and painful, but not long-lasting. 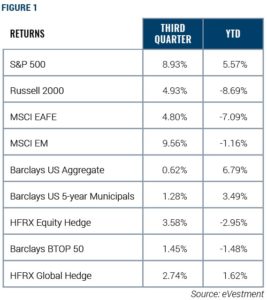 This is not to suggest that the pandemic’s impacts are trivial. They certainly are not. In fact, without the massive response of U.S. federal authorities and the U.S. Federal Reserve—on a scale that hasn’t been implemented since the Great Depression of the 1930’s—the virus’s effects could not have been mollified.

As mentioned in our last letter, we believe that a vaccine will be the only permanent resolution to COVID-19. While several possible vaccines are currently in development, more time must pass before the appropriate regulatory authorities can issue a final approval and public dissemination can occur. Between now and then, we believe further government relief will be necessary to offset the reduced economic activity caused by this virus. Will relief happen? Right now, the answer remains unclear.

The Potential for Fiscal Relief

During this period of continued negative economic impacts, the virus’s effects should precipitate further fiscal relief. At a recent meeting of the National Association for Business Economics, Federal Reserve Chairman Jerome Powell explained his perception of the risk that the federal government would be taking if further stimulus was not provided. In Powell’s view, such a decision would present an asymmetric risk to the economy, meaning, the risk of “overdoing it” by providing additional stimulus would be smaller than the risk of “creating unnecessary hardships for households and businesses.”

With federal policy rates at zero and the litany of liquidity-providing programs already introduced by the Federal Reserve, any benefits to be achieved through additional monetary policy will be limited. Fiscal policy will likely be required, particularly in the economic sectors most directly impacted by COVID-19 (such as airlines, hotels, leisure industries and childcare facilities). Of course, in the near-term, an additional stimulus will exacerbate America’s budget deficit. Over the long-term, such relief would help ensure that the safety protocols used to control the virus’s spread won’t irreparably harm the economy.

With the U.S. presidential election slated to occur in November, it appears that any additional federal stimulus may have to wait. After making strides through bipartisan effort following the pandemic’s arrival on U.S. shores in the spring, partisan rancor has returned and U.S. political parties appear deadlocked. Still, we’re highly confident that further fiscal stimulus will happen either post-election (during the “lame duck” session) or after the new Congress is seated in 2021.

During this timing gap, a lull in economic recovery activity may occur. This possibility is already being priced in by the market, with weaker equity prices appearing in September. A number of large companies (including Disney, United Airlines and Hilton Hotels) have announced new rounds of layoffs and thousands of family-owned bars and restaurants have either closed permanently or are barely hanging on, waiting for Congress to act.

Unlike past recessions, which were precipitated by the buildup of certain excesses in the economy, the required closures and social restrictions triggered by COVID-19 have made this downturn unique. For that reason, we believe it’s highly plausible that the economy could quickly regain its footing once the virus is contained.

According to early employment recovery data, this path toward improvement has already started. After rising to nearly 15% in April, unemployment is back down to 7.9%. As shown in Figure 2, nearly half of the job losses recorded have been recouped. However, the effects of the virus haven’t been proportional across the economy or the labor force. Most pandemic-related job losses were experienced by low-wage workers, largely in the hospitality industry. 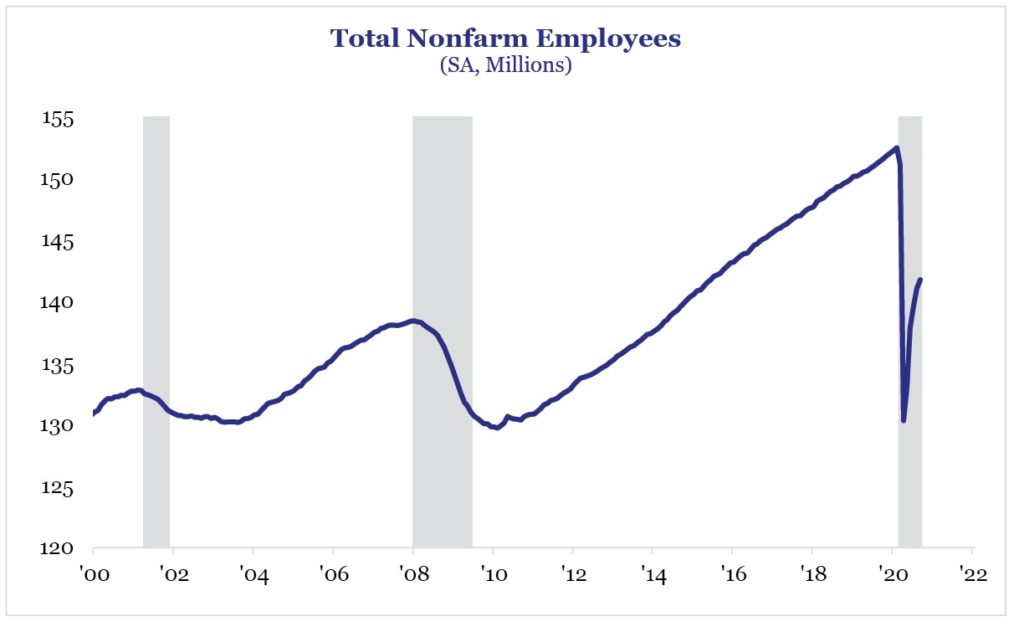 Additionally, as schools adopted online learning methods during this period, women have been disproportionately, negatively impacted as they shoulder the burden of childcare and at-home teaching. In a recent report published by McKinsey, “One in four women are either considering leaving their career or downshifting” as a result. Let’s hope this scenario doesn’t come to pass, as the U.S. labor participation rate is already at depressed levels. Losing women in the workforce would exacerbate that problem, creating a long-term, harmful effect on the economy.

In client portfolios containing Alternatives, we recently recommended adding positions to both gold and silver. While these positions are relatively small, we believe they’re meaningful in an environment where interest rates remain extremely low and, on a real basis, nominal rates minus the rate of inflation are negative.

We recently conducted a study examining the price of gold from 1972 (the year after the United States came off of the gold standard) through July 2020. We tracked gold’s performance during three discreet periods: 1) during periods where rates were positive, 2) during periods where rates were negative, and 3) during all periods. Figure 3 clearly illustrates the study’s results: gold tends to rise in negative rate environments. 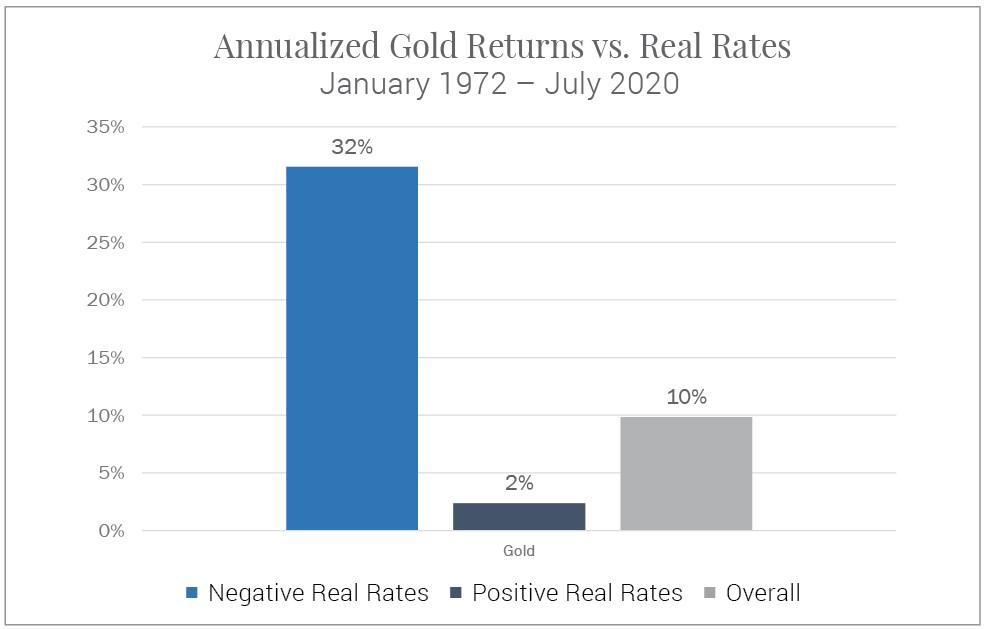 To take advantage of silver’s value relative to its historical ratio to gold prices, we’ve also included silver in these portfolios. In our view, the lack of cash flow makes owning precious metals unattractive on a long-term basis; however, tactically we believe this is a thoughtful and appropriate allocation for the present environment.

While we rarely make short-term prognostications and are always focused on the long-term picture, the near-term does raise cause for concern.

Under the risk of COVID-19, a prolonged period of uncertainty concerning who will become our next president could cause increased market volatility. Heightened volatility, in turn, could provoke a negative impact on equities and spur a near-term benefit to flight-to-safety assets (such as gold) or foreign safe-haven currencies (such as the Japanese Yen or the Swiss Franc).

During the Bush/Gore presidential contest in 2000, a similar period of uncertainty played out, taking several weeks to settle.  During times of market dislocation, course correction is almost always a bad decision. In such periods, we remind our clients of the importance of having an Investment Policy Statement (IPS) and the benefit of using that IPS as their North Star.

As temperatures begin to cool with the onset of autumn, many of our clients will return to our office locations in South Carolina, Arizona and Florida. As always, we’re here to serve you and welcome you home.

Our next letter to you will be in January 2021. Like many of you, we’ll be pleased to put 2020 behind us. Until then, we wish you all a safe and happy holiday season and a healthy and hopeful New Year.