Original Article: Click to view article from FGCU 360 News of the University
February 08, 2020, By Drew Sterwald 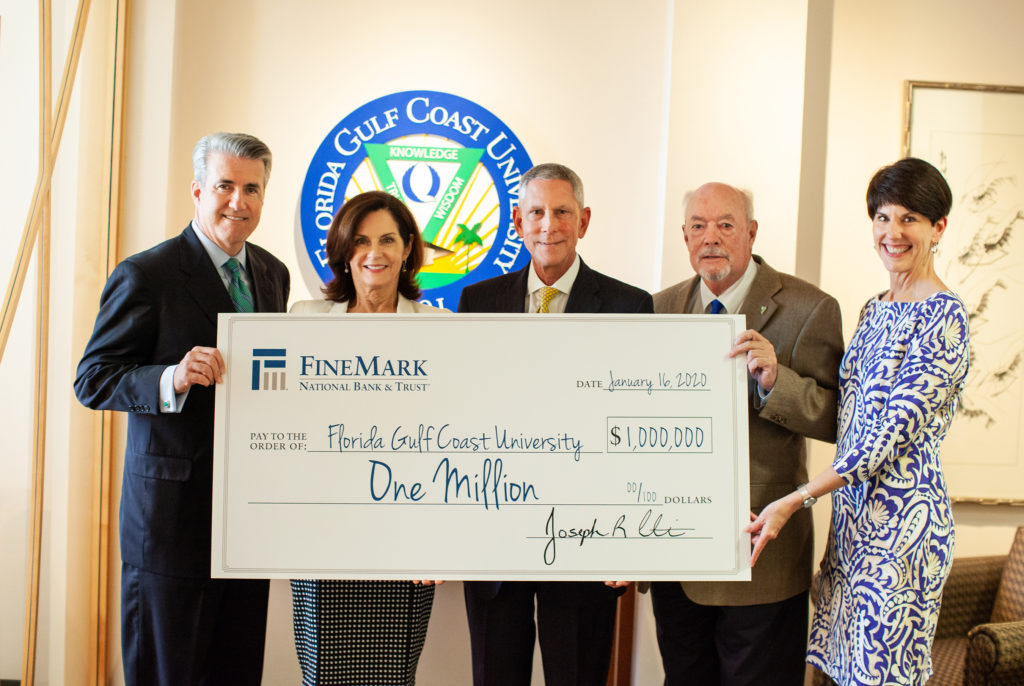 Florida Gulf Coast University moved closer to turning its plans for the Center for Entrepreneurship & Innovation into reality thanks to a $1 million pledge from FineMark National Bank & Trust — the largest single gift the Fort Myers-based company has ever made.

The three-story, 27,000-square-foot building on FGCU’s main campus will house the fast-growing School of Entrepreneurship as well as the Small Business Development Center and FGCU’s Regional Economic Research Institute, all of which engage in community partnerships that benefit economic development. The building is projected to cost about $9 million.

“FineMark’s generous gift puts us within sight of our goal to build a home for the School of Entrepreneurship and other programs that contribute to the economic vitality of Southwest Florida,” said Kitty Green, vice president for University Advancement and executive director of the FGCU Foundation. “This investment in FGCU exemplifies FineMark’s continuing commitment to community leadership and higher education, as well as the countless individuals who benefit from it.”

In recognition of the gift, a business development space planned for the building’s ground floor will be dedicated as the FineMark National Bank & Trust Incubator.

FineMark and its representatives have long been valued community partners of FGCU, volunteering expertise and mentorship to assist faculty, students and alumni, supporting academic and athletics programs, and serving on university governing and advisory boards.

It’s all part of FineMark’s commitment to community engagement, according to President and CEO Joseph Catti. He has been actively involved with FGCU for more than 20 years, serving on the Board of Trustees, Foundation Board of Directors and in other leadership and volunteer roles.

“Our approach starts with our vision statement: ‘to make a positive impact on the individuals, families and communities we serve while being good stewards of FineMark’s resources,’ ” Catti said. “It is who we are as a company and as individuals. We choose to give our time and resources because it is the right thing to do. We’re really proud to be in a position to make this gift.”

Placing its support behind building the Center for Entrepreneurship & Innovation is especially appropriate, he noted, because FineMark began as an entrepreneurial venture. Founded in 2007 in Fort Myers, it now operates offices in Bonita Springs, Estero, Naples and Palm Beach as well as Scottsdale, Arizona, and Charleston, South Carolina.

Entrepreneurship is part of the corporate culture. Catti recalled a conversation with Dr. Mike Martin in which the FGCU president used the term “intrepreneur” to refer to entrepreneurs who work to innovate within larger companies.

“We encourage our people to come up with new ideas,” he said. “That is the entrepreneurial nature of what we do.”

That strategic focus aligns well with FGCU’s, according to Dr. Sandra Kauanui, director of the School of Entrepreneurship, which has earned the university national recognition from The Princeton Review as the top Florida school for undergraduate entrepreneurship studies.

Kauanui added that Adria Starkey, FineMark’s executive vice president and Collier County president, has been a friend and mentor to her and to the entrepreneurship program as well as a longtime champion of the Lutgert College of Business. Now serving as chairwoman of the School of Entrepreneurship Advisory Board, Starkey has for years been a guest speaker, mentor and inspiration for FGCU students.

“I’ve lived in Collier County more than 30 years, and having a university in our presence is a tremendous benefit to the economy and the community,” Starkey said. “I find the students at FGCU inspiring and love working with them any way I can. The School of Entrepreneurship has already achieved so much more than anyone anticipated in just two years. The sky’s the limit.”

Since FGCU launched its bachelor’s degree in interdisciplinary entrepreneurship in 2017, program enrollment has grown 30 percent to more than 500 and it’s now the fifth-largest major. The school also administers the Runway Program business incubator and the Veterans Florida Entrepreneurship Program, which have been operating north of campus at FGCU’s Emergent Technologies Institute.

The Center for Entrepreneurship & Innovation will bring those programs to campus. Less than a million dollars is left to secure a $4 million matching gift challenge and begin construction later this year on a site adjacent to the new Student & Community Counseling Center and the Little Eagles Learning Center. In addition to the FineMark National Bank & Trust Incubator, the facility will house classrooms, labs and associated offices.