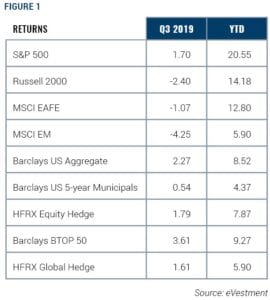 This quarter’s featured quote comes from, Jack Bogle, who passed away this past January. Bogle was the founder of the Vanguard Group, the firm credited with creating the first index fund available to the general public, the advent of which completely revolutionized the mutual fund industry. Bogle is widely viewed as one of the most influential investors of the modern era. We include his quote not because we are anticipating a sudden equity market sell off – we are too humble in our forecasting skills to ever make such an assertion – but instead to remind our readers that volatility is to be expected in the equity markets. It is never a question of if volatility will return, but when, and how investors will manage their portfolios in more challenging times.

The low-volatility market conditions that have characterized equity markets over the past decade have lulled many equity market participants into a deep sense of complacency. At FineMark, we remain vigilant in our stewardship of client portfolios and are constantly assessing risk and return opportunities with a realistic understanding that market cycles do occur. While we don’t feel that we have reached the end of the current cycle’s expansionary period just yet, we recognize that we are closer to that milestone.

During the third quarter of 2019, equity market returns moderated somewhat, while fixed income securities outperformed, outstripping our most ambitious return expectations for the asset class. Market participants rotated into fixed income as concerns grew over the possible end of the current economic expansion coupled with lower future inflation expectations. The Bloomberg Barclays U.S. Aggregate Index gained 2.3% during the third quarter and has now increased by 8.5% year-to-date. While the fixed income market’s performance has been impressive in 2019, investors shouldn’t expect such returns to continue. For the first time in several years, alternatives are posting respectable rates of return after what has been a prolonged dry spell for the group.

Finally, we would also like to emphasize that Bogle’s words aren’t intended to steer investors away from equities; quite the contrary. Bogle was a firm believer, as are we, in the long-term growth potential, inflation protection, and tax efficiency benefits of equity ownership. Bogle’s quote is an important reminder that equity markets are cyclical by nature and that, as investors, we must remain vigilant in managing portfolios.

MACROECONOMIC ENVIRONMENT AND MARKET INDICATORS PROVIDE MIXED SIGNALS
The macroeconomic environment is showing some signs of weakness, but signs of market stability also remain. On the positive side, corporate profit margins and unemployment – two factors that we feel are reliable indicators of macroeconomic health – have been resilient. Operating profit margins for S&P 500 companies continue to grow on a year-over-year basis, a positive indicator of potential growth to come.

On the other hand, ongoing global trade disputes and other geopolitical challenges could present a significant headwind to the forward-looking investment environment. As of mid-October, however, the United States and China appear to be making significant progress toward resolving their trade dispute. We believe that further de-escalation of the tariff war is likely because it is in both sides’ best interests to reach an agreement. But if this momentum stalls and future tariff increases are implemented, corporate margins could be threatened. Protectionist trade policies put corporate profits at significant risk given how integrated the global economy has become. Reorienting global operations and supply chains will be difficult, disruptive, and costly for many businesses if protectionist policies became the permanent new normal.

In addition to monitoring the broader macroeconomic environment, we closely monitor a number of non-economic market indicators for signs of equity market health. Retail investor participation in equity markets, as measured by flows into mutual funds and ETFs, is one such indicator that we feel paints a meaningful picture of the current market environment. During the third quarter, retail investors pulled out of equity funds in favor of bond funds and cash. The aforementioned trade tensions between the U.S. and China, and increasing concerns about the global economy, seem to be driving retail investors away from equities and into bonds.

We generally view retail investor flows as contra indicators. Typically, retail investors get most excited about equities at the most inopportune times, such as toward the very end of a bull market cycle. To make matters worse, retail investors also tend to exit equity markets during bear market troughs, when valuations are very low. Today, as many “mom and pop” investors are showing a preference for investing in bonds, not equities, we remain cautiously optimistic that such moves indicate there is additional room to run in the ongoing market expansion, albeit at levels of increased volatility.

As we continue to monitor the global macroeconomic environment, we see additional headwinds on the horizon. While we believe the economy is continuing to edge closer to the end of this current expansionary period, we haven’t cut risk exposure in client portfolios just yet. However, we are strongly emphasizing the inclusion of asset classes and strategies that are less economically sensitive in our clients’ portfolios. While such strategies may fail to keep pace with broad equity markets during expansionary periods, they buttress overall portfolio returns during more tumultuous times and can result in superior risk-adjusted returns over full market cycles.

UNITED STATES/CHINA TRADE TENSIONS: PROGRESS AND MOMENTUM
As we continue to monitor the ongoing trade dispute between the United States and China, we remain hopeful that the two nations will soon reach an accord. There was major progress toward this direction on October 11 when President Trump announced what is being called “Phase 1” of a potential larger agreement with China. Phase 1 involves the United States not implementing tariff increases that were scheduled to go into effect on October 15 in exchange for China’s commitment to purchase $40 billion to $50 billion of U.S. agricultural exports.

We are optimistic that further progress will be made primarily due to continued pressure on both sides to reach a resolution. Contrary to what many in the media are suggesting, President Xi of China does face political pressure to reach resolution with the United States. U.S. tariffs are dramatically affecting the Chinese economy. As a net exporter, China is heavily reliant on selling goods to other countries, the United States chief among these. The United States, on the other hand, has long maintained a trade deficit (net importer of goods). While China has softened the impact of U.S. tariffs by weakening its currency, such a strategy has limits, as it results in much higher domestic food and energy costs. We believe pressure on President Xi will continue to mount due to these circumstances.

The news of the preliminary agreement on Phase 1 marked significant progress in the de-escalation of the trade war, but there are many important issues that still must be resolved, including intellectual property and foreign ownership reforms. Whether those complex issues will be addressed remains to be seen. But, in the bigger picture, we expect there will be a favorable resolution over the next several months. 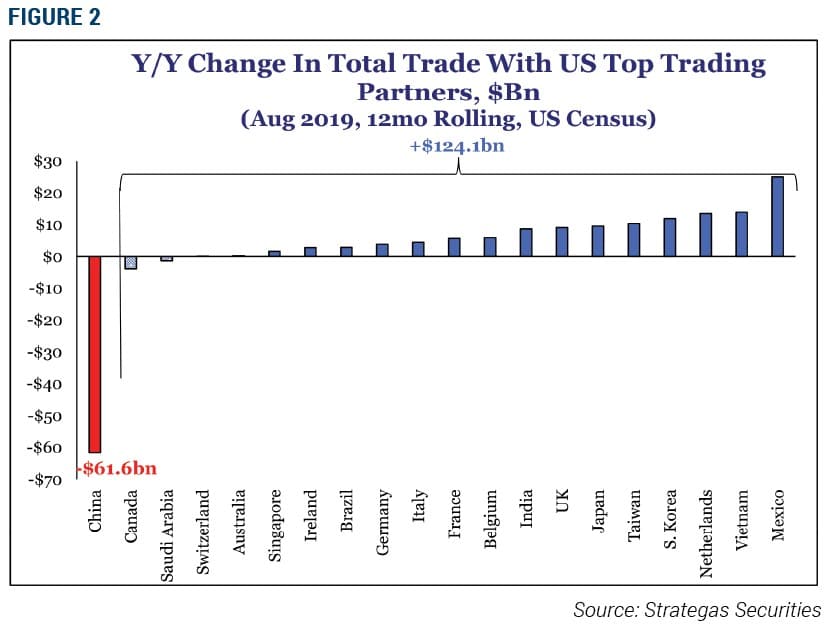 TRUMP IMPEACHMENT PROCEEDINGS: HISTORICAL CONTEXT FOR MARKET IMPLICATIONS
Our mindset regarding the impeachment proceedings against President Trump is an investment-oriented view, not a political one. As such, we seek a historical context for these proceedings and their likely effects on the investment environment. In modern history, we have two historical precedents to draw from: the impeachment of President Nixon, which began in October 1973, and that of President Clinton, which began in October 1998.

Given the facts and circumstances of the current proceedings, our expectation is that this process more closely parallels the impeachment of President Clinton, wherein the House of Representatives voted to impeach the President, but he was subsequently acquitted in the U.S. Senate. Equity market performance was positive following the Clinton impeachment; the S&P 500 continued to new highs in 1998 and saw continued gains in 1999. Contrast this with the impeachment of President Nixon, who avoided impeachment by resigning from office in August 1974. It is widely believed that President Nixon resigned because it was assumed that the House would have impeached him and the Senate would have convicted him. During the Nixon investigation, equities sold off significantly in 1973 and declined further in 1974.

It is our belief that President Trump will not be removed from office and will complete his term. Under this outcome, we expect the market impact to be rather minimal. Judging by the market’s performance to date, we feel that this is a consensus view, as we haven’t seen a significant market reaction to what is seemingly more of a political spectacle.

FED ACTION/YIELD CURVES: FURTHER EASING EXPECTED
In our second quarter letter to clients, we stated that the inverted yield curve indicated that “the U.S. Federal Reserve must now act—or run the risk that the current economic expansionary period will end.” During the third quarter, the Fed did act decisively, cutting the benchmark Fed funds rate twice, once in July and again in September, for a total of 50 basis points in interest rate cuts. The Fed has characterized these rate cuts as “mid-cycle adjustments.” We expect further easing before the end of the year. We also expect that the Fed will be judicious in any significant policy shifts next year, especially as we get closer to the November election, as the Fed seeks to emphasize its politically neutral status. The additional market liquidity that results from the Fed’s monetary easing will continue to provide support to risk assets.

WELCOME BACK
As we enter the fall and winter seasons, many of you are returning from your summer sojourns. We hope your time away was enjoyable. We look forward to welcoming you back in each of our offices in Florida, Arizona, and South Carolina.

We are steadfast in our approach to safeguard the assets you have entrusted to us; it is a duty we take with great pride and responsibility. In addition, our commitment to client service and satisfaction is unwavering. It is our sincere pleasure to serve as your investment advisor, and we look forward to our next visit with you. 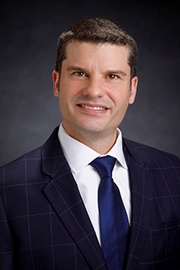