Miguel de Cervantes, author of Don Quixote de la Mancha, is known as the most famous novelist in Spanish history (and, quite possibly, the world). In pondering the author’s quote, above, it’s worth noting that individual investors are inclined to view the quote and think that simply having a greater number of securities in a portfolio achieves portfolio diversity. Investment professionals, on the other hand, are trained to build portfolios using a variety of different securities and strategies to comport with the risk levels and return objectives of the client. To build in portfolio diversity effectively one must include a variety of different types of risk exposure that have discrete drivers to be effective at creating an allocation that can endure a variety of market circumstances.

The current environment, however, has created a multi-year conundrum in which diversification away from high-equity risk has blunted overall portfolio returns. While this dilemma has prompted challenging conversations with clients over the merits of diversification, we continue to believe that diversifying exposure across geographies, strategies, and security types remains the best way to build enduring portfolio allocations that will generate robust performance in varied economic environments.

Historically, bear markets in equities occur every 4 to 5 years. However, it’s been almost 13 years since a traditionally defined bear market has occurred in the United States. While some assert that the nature of our economy is different than it once was—and classic boom-bust cycles are a thing of the past—we disagree.

While our crystal ball remains foggy in terms of predicting a “new” bear market, we ardently believe that this business cycle isn’t dead. In fact, we expect to experience equity market sell-offs in which portfolio diversification will demonstrate its merit once again. Until then, we’ll continue to advise against holding “all of your eggs in one basket,” even if that basket is filled with equities.

First Quarter 2021 proved to be another financial season in which equity markets rose confidently, and risk (as measured by market volatility) ground steadily lower. Much of this optimism was driven by both further economic stimulus and a significant drop in new virus cases and deaths.

In January, COVID-19 death rates averaged more than 3,000 per day; these numbers fell steeply (to nearly 1,000 a day) by late March and continue to fall. The rollout of vaccines across the nation has progressed rapidly; about 16% of the U.S. population had been fully vaccinated by quarter’s end, with that number continuing to rise. 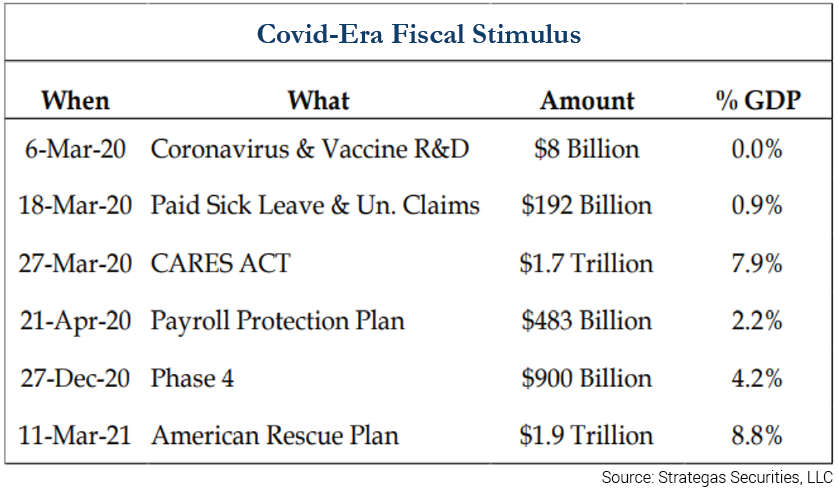 As we wrote in last quarter’s newsletter, we expected the Biden administration to pass another COVID-19 relief bill early this year. On March 11, 2021, President Biden signed the American Rescue Plan, authorizing an additional $1.9 trillion stimulus. This plan brings the total federal response to COVID-19 to approximately $5.2 trillion (or 24% of the U.S. Gross Domestic Product (GDP). Resulting optimism led to a swift uptick in interest rates as 10-year Treasury yields doubled, producing a negative effect on the value of fixed-income instruments.

In our Q4 2020 newsletter, we also discussed our lack of enthusiasm for investment-grade bonds and expressed that sentiment through our significant underweight position in the asset class. While our disposition remains unchanged, we believe the worst of the erosion of principal has already occurred. However, there is little prospect for re-rating in this space as we expect a lower-for-longer rate posture from the Federal Reserve to limit rates for now. In that communication, the Federal Reserve has been clear: It will focus distinctly on returning the economy to full employment while perhaps allowing inflation to run above the normal 2% target level.

The Washington Agenda: What It Means for Wall Street

We believe that the next step on the new administration’s legislative path will be a significant infrastructure bill. Though talk of such a bill has been discussed since the 2016 presidential campaign, we believe it will happen with certainty this year; likely in the third quarter.

With talks of a $2.3 trillion plan, this bill will have major economic ramifications. While it’s too soon to tell what its impacts may be, we suspect the effects to differ from the COVID-19 stimulus impacts we’ve seen to date.

To temporarily supplement the void caused by shrinking economic activity and alleviate the level of permanent damage, our government’s pandemic relief plans essentially administered money to be distributed to individuals and businesses. These funds were dispensed quickly—within days and weeks —to help people in immediate need, preventing permanent economic damage from the pandemic.

Infrastructure spending will be much slower to impact the economy as the funds will flow out more slowly, over quarters and years. Traditionally, the long-term impact of such aid money would have been driven significantly by the projects themselves. For example, if such projects are well thought out, economically viable, and have a positive impact on an area (such as a rail-system expansion designed to alleviate highway congestion), the impact will be positive and long-lasting. On the other hand, if the strategies have no real economic purpose (e.g., Congress decides to build a bridge connecting two sparsely inhabited islands in Alaska), the impact will be negative.

While we hope that this administration’s strategy will be a purposeful investment in America’s future, we suspect that a mixture of these two scenarios to be used. 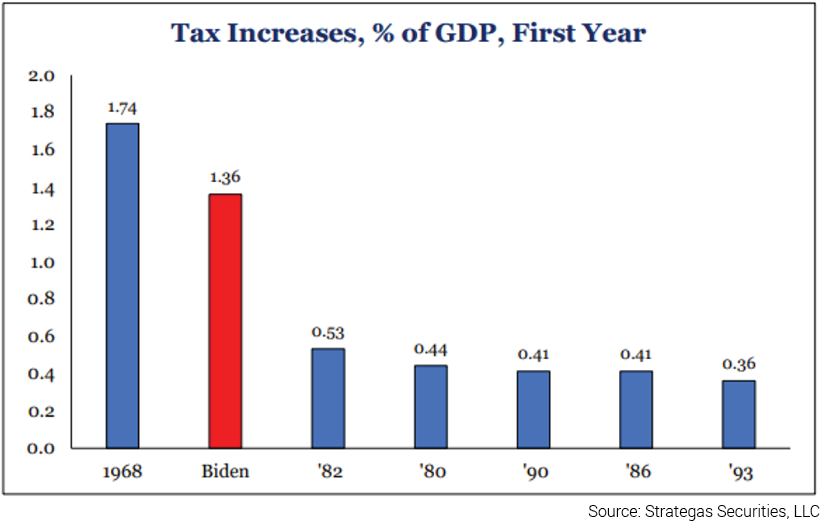 Based on percentage of the GDP, the size of the proposed tax increase is the largest in 50 years, and it’s expected to reduce S&P 500 earnings per share (EPS) in 2022 by nearly $12 a share. The current consensus EPS estimate for the index of $202.11 would fall to approximately $190.29. 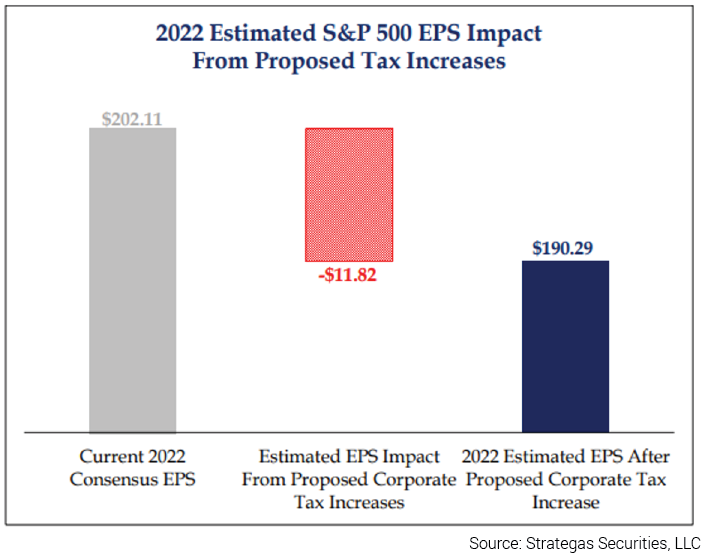 One of the most written about concerns on Wall Street recently is the risk of rising inflation. While we do believe this risk is real, we don’t expect inflation rates to resemble those experienced in the 1970s and 1980s.

In those days, inflation ran well into the double digits, reaching 14% by 1980. This is not a scenario we see unfolding today. Rather, we foresee a transitory period of increased inflation possibly ranging between 2.5 to 3.5%, as the U.S. recalibrates to meet pent-up and returning-to-normal service demands largely in the hospitality, travel, and leisure sectors.

Several deflationary factors support our conviction. The first factors are the inflation-defeating lessons learned from late Federal Reserve Chairman Paul Volcker (1979-1987). In 1980, Volcker raised the federal funds rate to a peak of 20%. Initially, these interest-rate hikes drove the economy into the ground and spurred an increase in unemployment to more than 10%. By 1983, however, inflation had retreated, falling below 4%. Though unpopular at the time, Volcker proved to the market that he was willing to do what was necessary to beat inflation, regardless of the risk. Through his actions, Volcker demonstrated that while the medicine administered might taste awful initially, the resulting cure could be deeply effective.

Permanent behavior changes resulting from the COVID-19 crisis are the second deflationary factor, which includes consumers’ migration to online shopping. While this trend was already popular pre-pandemic, it has since accelerated and, we believe, it is here to stay.

The ramifications of this shift are deflationary. As of late 2020, the U.S. held approximately 59 square feet of retail space per American household (compared to ~49 square feet in 1990).1 Over the next 2 to 3 years, we expect to see the U.S. retail footprint shrink significantly as retail activity continues to move online and existing retail space is shuttered and repurposed.

The final deflationary factors we’re seeing are the current changing demographics within the United States and the rest of the developed world. In 1950, the birth rate of women in developed countries averaged 4.7 children. That number fell to just 2.4 in 2017 and is expected to fall below 1.7 by 2100. Consequently, the ramifications of this decrease in global population and subsequent economic output will be significant as populations in the most productive nations shrink in size while simultaneously aging, leaving a smaller percentage of working-age people.

The numbers supporting this fact are staggering. For example, Japan’s population is expected to fall from a peak of 127MM in 2017 to less than 53MM by 2100; in Italy, the population is expected to fall from 61MM to 28MM over the same period.2 Similarly, the fertility rate in the U.S. hit a low of 1.7 in 2019, far below the 2.1 rate required for population replacement. Hopes for a baby boom fueled by mandatory COVID-19 lockdowns failed to materialize. As populations shrink, this macro headwind greatly diminishes the prospects for higher inflation rates. Considering all of these factors, we believe the risk of destabilizing inflation will not come to pass.

As temperatures begin to rise, bringing us closer to the freedoms of a long-awaited summer, we know that many of you will leave your warm-weather homes for cooler, northern locales. We wish each of you safe travels and good health and remind you that we’re here to serve you no matter where you may reside. As always, we‘re grateful for your continued confidence and look forward to assisting you in any way we can. In the meantime, we wish you a relaxing and enjoyable summer season!

Articles In This Issue:
Is it too late to make a gift of my exemption?
Download Full Newsletter Here