In 2002, during an Iraq War press briefing, Rumsfeld made the famous statement quoted above. Interestingly, his comment could be used today to describe the current investing environment. “Unknown unknowns” (as Rumsfeld called them) are scenarios or eventualities that manifest unexpectedly, yet must be prepared for even though they cannot be forecast.

The most recent “unknown unknown” to which we can all relate is, of course, the COVID-19 pandemic. Had someone been able to predict with certainty that a respiratory virus would rapidly spread around the globe, threaten the world’s population, and force governments to implement restrictions that would lead to a near secession of traditional face-to-face commerce, they surely would also have expected equity markets to experience record-setting declines in value. Instead, the equity returns depicted in Figure 1, were the result.

Clearly, the markets’ results over the past year have been breathtakingly (and unexpectedly) positive. Acknowledging this, what can we reasonably conclude? How can we confidently devise portfolios that will endure through the “unknown unknowns?”

We believe that two major investment principles hold the answer: 1) Broadly diversified portfolio investments that span geographies and utilize a multitude of strategies and security types in alignment with each investor’s unique objectives and risk tolerance levels 2) portfolios that are rebalanced regularly to ensure allocations remain at an optimized level for both a client’s risk profile and market conditions.

Understandably, over the past year, many investors have resisted the idea of rebalancing their portfolios. After experiencing an extended period of outsized positive equity market performance, rebalancing carries its own explicit costs. For individual investors, that cost appears in the form of capital gains realization (i.e., the difference between the legacy cost basis of an asset versus what that asset can be sold for today).

The IRS collects its share of that profit as capital gains tax. Although paying taxes is never fun, it is an inescapable reality and part of American life. To maintain perspective, it may help to remember that generating positive rates of return is the purpose of risk capital allocation.

Furthermore, rebalancing has a natural value bias because investors generally sell assets with the most appreciation (which are typically less attractively priced today) and buy assets that are currently undervalued and haven’t performed as well.

While we don’t know what the Biden administration’s future tax policy will be, we do expect it to implement a higher tax regime. Therefore, the cost to rebalance a portfolio today may be lower than it will be in the future. Consequently, it’s possible for investors to benefit from current tax rates while avoiding the negative impacts of portfolios with risk profiles that will rise above their risk tolerance.

Following the torrid action observed in Q1 2021, which was largely fueled by government largess, the Second Quarter felt almost normal. To be clear, equity market returns were strong across the board; while both the bond market’s large declines and the rapid ascent of cryptocurrencies abated in Q2.

The period’s biggest gains were experienced in value-oriented large cap equities, but these weren’t the high-growth, high-valuation issues that have dominated in the past. In the bond market, the steep rise in ten-year treasury yields slid backwards.

Our Thoughts on the Second Half of 2021

When the Federal Reserve communicates its intention to begin tapering its bond-buying program in the Third Quarter (and the yield curve steepens as a result), we expect long-term interest rates to gradually rise. Overall, equity market comparisons for the last half of the year will likely be more challenging than those in the first half. The effects of abating fiscal stimulus coupled with the Fed’s need to consider a return to normalized rates should also cool enthusiasm.

The reopening of the U.S. economy has created distortions in the securities market and elsewhere, which will continue to play out through the end of the year. For example, as individuals were quarantined at home during the height of the pandemic, spending moved away from traditional consumer discretionary items and focused instead on home improvement. This dramatic increase in demand had a massive effect on the lumber market aimed at residential construction and renovation which, combined with reduced production capacity as sawmills, shuttered or limited operations due to COVID-19, triggered a meteoric rise in prices. Now, as consumer spending shifts this summer toward leisure and hospitality services, the price of lumber has fallen while the costs of other items (such as rental cars and hotel room rates) have risen sharply. We believe these distortions will continue globally across markets as the year wears on and consumption habits continue to shift.

A Rapid Return to Normalcy

Compared to most developed nations, the U.S. has done an excellent job of vaccinating its population against COVID-19. Israel and the United Kingdom, countries with far smaller populations than the U.S., have also had successful vaccine rollouts. American life quickly reverted to normal once vaccination options were introduced across the Nation. For many, memories of the virus faded as mask mandates were lifted and people began to travel again.

Other countries are being more cautious. For example, as Japan continues to struggle with its vaccine rollout, this summer’s Olympic Games in Tokyo, originally scheduled to occur in 2020, will proceed without spectators.

During the height of the pandemic, the travel and hospitality industries emerged as two of the most severely impacted sectors of the U.S. economy. This summer, as Americans escape the confines of their homes and embark on long-awaited vacations, widespread shortages in both labor and goods have appeared. We believe that a confluence of factors (such as continued, enhanced jobless benefits and diminished options for childcare) is contributing to this situation.

Additionally, the abundance of existing job openings may dissuade people from rushing to rejoin the labor force as many understand that the pendulum has swung away from employers. Others may also postpone their job search because they want to enjoy the summer before looking for work.

Correspondingly, a significant change in the way people want to work is also at hand. According to the July 9, 2021, Wall Street Journal article entitled, “Job Openings Are at Record Highs. Why Aren’t Unemployed Americans Filling Them?”, 55 percent of job seekers are searching for work that can be done remotely. The Federal Reserve Bank of Dallas found that nearly 31 percent of those who lost their jobs during the pandemic don’t want to return to that same job. This change is causing a mismatch between the positions that are available and the skills needed to fill them. Dallas Federal Reserve Bank President and CEO Robert S. Kaplan noted, “These factors may not be particularly susceptible to monetary policy.” 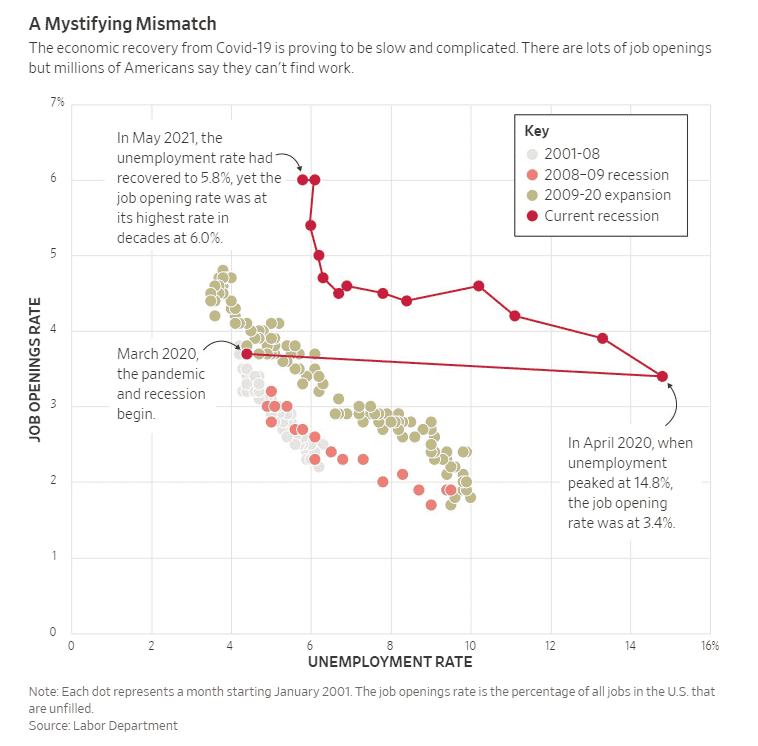 Compared to other periods, as shown in Figure 2 above, the current recession has followed an abnormal path. Generally, as the job opening rate rises, the unemployment rate falls. As of June 2021, the unemployment rate has fallen to 5.9 percent from a COVID-19 peak of 14.8 percent, yet the job opening rate is the highest it’s been in decades with approximately 9 million unfilled jobs.

What’s odd about this data picture is that both job openings and unemployment have remained elevated simultaneously for months. This scenario is also causing labor inflation in what would historically be a high unemployment period. The mismatch between open jobs and workers’ desires is driving this rate higher than traditional models would typically predict.

From a market perspective, we’re broadly enthusiastic as we watch this path unfold because it validates our belief that the healing of the economy will continue to be swift, and any resulting permanent damage will be limited. This situation also boosts our confidence that the broader economy is on solid footing and recovery is underway and moving quickly. Additionally, the fact that jobs are filling more slowly may lead to better job matches, reducing future employee turnover.

However, we also recognize that the news flow as we emerge from COVID-19 could have negative market impacts. Most significantly, we are watching the volatile Purchasing Managers’ Index (PMI) data and bond market concerns over reduced market liquidity by the Fed which could make markets nervous. A “taper tantrum” similar to what the bond market experienced in 2013 when then Federal Reserve Chairman Ben Bernanke tried to normalize rates coming out of the Global Financial Crisis of 2008 is not out of the question.

As market participants, we hope policymakers recognize that government largess is not the solution to all that ails America. With COVID-19, a medical solution was required to cure a medical problem. While many sectors were disproportionately harmed as the virus swept across our Nation, other segments (including the “work from home” sectors) did disproportionately well.

As we discussed in our Q1 letter, it appears the Biden administration is determined to complete an infrastructure bill this year. Good progress has begun on that effort and, if bipartisan support can be attained, Biden appears willing to pass a bill that’s smaller than originally proposed. As America’s national infrastructure is rebuilt, we’ll continue to identify optimal public and private market opportunities for our clients to ensure they reap the benefits of an expected multi-year opportunity.

Wishing You a Safe and Happy Summer

Each quarter, we strive to provide you with insights that are helpful and enjoyable to read. Soon, we hope to increase the number of in-person events at our office locations. In the meantime, we remain diligent stewards of your assets and thank you for your continued trust in us. If you have any questions, please reach out to your contact at FineMark.

Articles In This Issue:
What about that IRA?
Download Full Newsletter Here