I guess I should warn you: If I turn out to be particularly clear, you’ve probably misunderstood what I’ve said. U.S. Federal Reserve Chairman Alan Greenspan in 1988, regarding his “Fedspeak” style.

From 1987-2006, under the direction of U.S. Federal Reserve Chairman Alan Greenspan, the obtuse communications provided by the Federal Reserve left ample room for interpretation. Fortunately, communications from succeeding chairmen, beginning with Ben Bernanke and continuing with current Fed Chairman Jerome Powell, have been more direct. Yet even as today’s communications seem easier to interpret, the litany of “off-ramps” intertwined with the messaging allows the Fed to pivot should circumstances change and a different policy orientation be required.

Although market participants have grown accustomed to receiving information spoon-fed by the central bank, future market conditions and impacts (such as inflation and unemployment) remain challenging to predict. The signs of inflation we’re seeing in both consumer and producer data lead us to believe that the Fed will begin to taper quantitative easing before the end of 2021. Now that the Senate has passed legislation to raise the debt ceiling through early December, we expect this tapering to be announced soon. 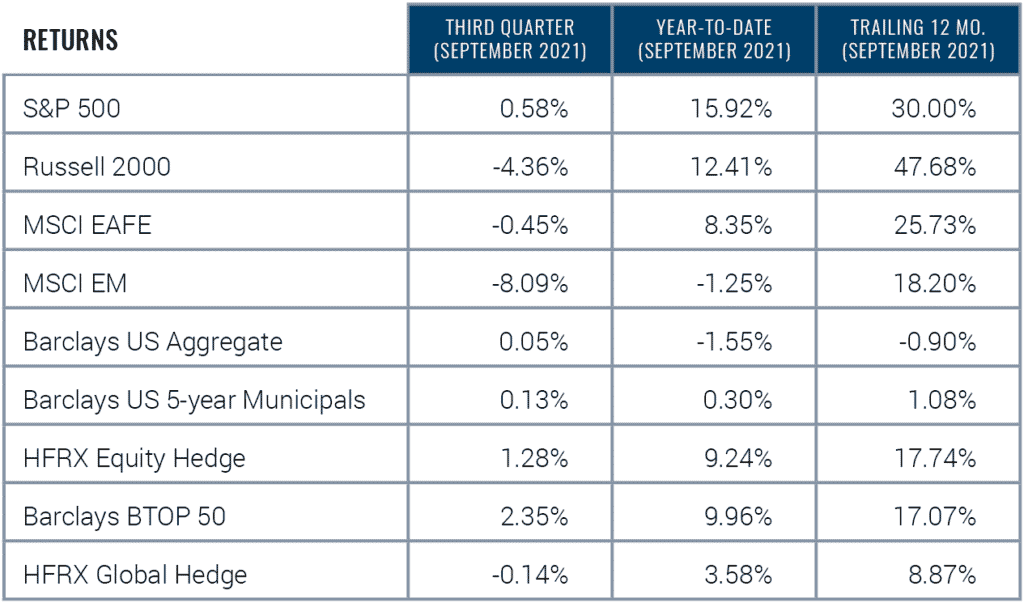 Quantitative easing, the Federal Reserve’s bond-buying program, consists of the Fed purchasing both Treasury and agency mortgage-backed securities. Today, that purchasing pace is $120 billion per month with $80 billion going to Treasury securities and $40 billion going to mortgage-backed securities. Given the improving economic underpinnings and inflationary trends currently underway, we consider this tapering to be both likely and appropriate.

Another factor to consider is our nation’s fiscal deficit, which is shrinking as emergency COVID stimulus runs out and tax receipts pick up as a result of improved economic activity. This smaller fiscal deficit will reduce Treasury issuance and, for that reason alone, the Fed should probably taper its purchasing program.

With that said, we don’t expect the federal funds policy rate to move any time soon. Given the current longer-term structure of rates, policymakers have little room to maneuver to avoid creating a curve inversion (i.e., the condition where short term rates are higher than longer term rates). If an inversion were to occur, markets will view this as the harbinger of a recession — something the Fed would not want to precipitate. On the other hand, tapering quantitative easing should gradually lift longer-term rates higher (as the Fed steps away as a buyer), eventually allowing federal funds rates to rise. 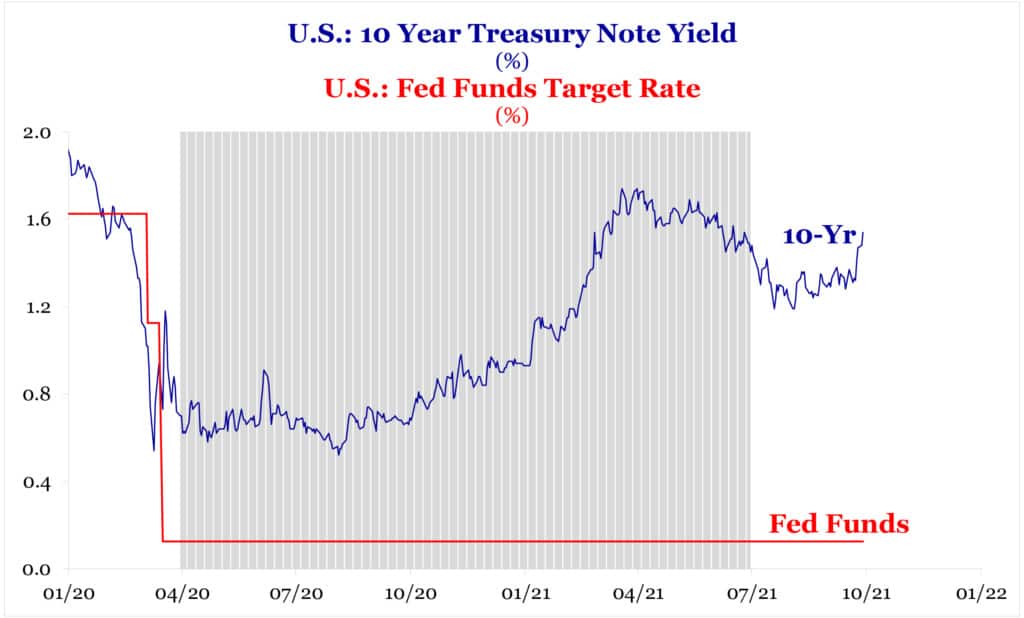 In our Q2 letter, we discussed the benefits of extensive portfolio rebalancing, which included taking capital gains under the current tax policy. At the time, we anticipated that the Biden administration would implement a higher tax regime. Although we’ve gained greater clarity on this subject, we still don’t know to what degree taxes may be raised.

Tax increases are generally unpopular, and we expect this one to be no different. Adding to the debate is the growing public belief that the rich aren’t paying their fair share in U.S. taxes. Data shows, however, that the bulk of taxes are paid by high-wage earners — not the middle class or low-wage earners. Compiled using IRS data, Figure 3, below, clearly shows that the top 1% of earners are paying 40% of the nation’s tax burden. 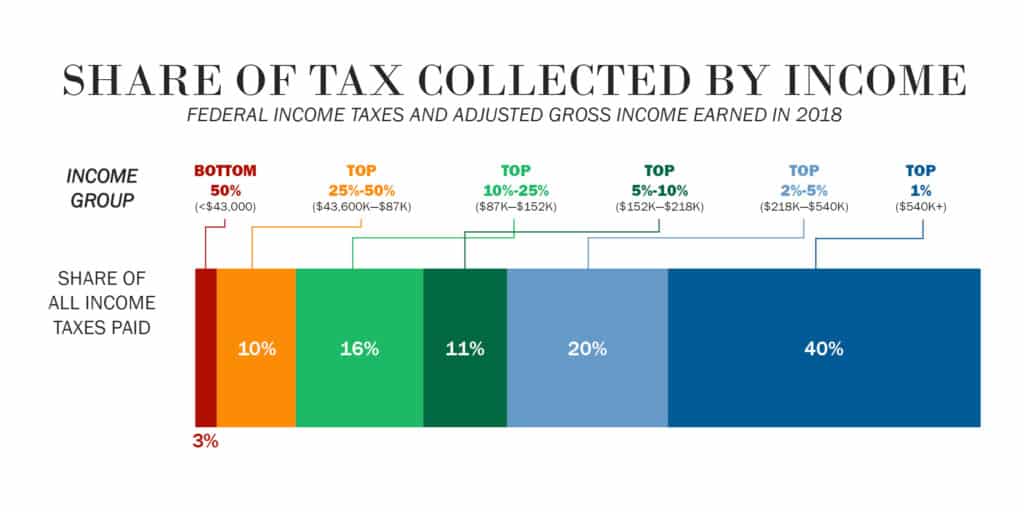 Interestingly, this information is not widely known and data releases such as the June 2021 article published by ProPublica propagate the misconception that the rich aren’t paying their fair share in U.S. taxes. The article spotlights some of America’s wealthiest taxpayers, including former Amazon CEO Jeff Bezos, Berkshire Hathaway CEO Warren Buffett, businessman and former New York City Mayor Michael Bloomberg, and Tesla Cofounder and CEO Elon Musk, and states their effective tax rates. However, it’s important to note that these rates were computed based on the amount that the respective wealth of these individuals grew, not on the actual capital gains they realized.

As it stands today, the U.S. does not assess a wealth tax on the living — that type of tax is only paid in the form of estate taxes by the deceased. While wealth tax proposals have been made in Congress, they haven’t gained traction and aren’t included in the current tax proposal.

The new tax bill that’s being advanced is still in flux; the current tax increase proposal includes approximately $2 trillion in tax increases. Of this total, corporate tax increases are approximately $900MM. According to our research provider, Strategas, this figure could equate to an approximate 5% hit to S&P 500 earnings (or about $10 of index earnings per share (EPS)).

The corporate tax rate is targeted to rise from its current 21% to 26.5%. Although a final agreement on Organization for Economic Co-operation and Development (OECD) global taxes has yet to be reached, we expect this increase to be debated. American corporations pay taxes on foreign-sourced income; therefore, most OECD countries don’t tax domestic companies on foreign-sourced income, which puts U.S. companies at a clear disadvantage and could incentivize them to seek friendlier jurisdictions.

On the individual side, tax increases are coming in at approximately $1 trillion, largely focused on small business income and those with Adjusted Gross Income (AGI) over $400,000. While higher taxes are a certainty, the reinstatement of deductions for state and local taxes (SALT) may help blunt the higher rates.

Once passed, much of the bill will go into effect as of January 1, 2022 (except for the increase in long-term capital gains, which will apply for sales that occur on or after September 13, 2021, according to a recent Wall Street Journal article.

Today, the increase in capital gains is on target to rise from its current 23.8% to 28.8%. With an AGI greater than $5MM, there are also plans for an additional 3% surcharge to that. Other actions could include the application of wash sale rules to cryptocurrency, similar to those applied in the securities world.

Ordinary income rates look to rise to 39.6% from current 37% levels. To the extent possible, business owners may be compelled to pull some of next year’s income into 2021. Additionally, taxpayers may want to consider delaying charitable deductions until 2022. Note: As FineMark doesn’t provide tax advice, these are not recommendations. However, based on our observations of how the law may ultimately unfold, we strongly urge our clients to discuss with their CPAs any actions they should take in light of these higher rates.

Lastly, the capital gains rate is slated to rise to 28.8%. There’s been no mention of higher taxes on dividends. If this outlook doesn’t materialize, expect corporate CFOs to shift away from share repurchases and toward higher dividends.

Third Quarter 2021 was another strong quarter for markets, although the period ended with a whimper for equities as the markets took a breather in September, marking the first down month for the S&P 500 since January.

During Q3, the U.S. experienced a resurgence of COVID deaths, largely tied to vaccine hesitancy, which slowed the pace of vaccinations that began in the first half of the year. Other bottlenecks in the economy (including labor and automobile chip shortages and a backup in homebuilding) also contributed to a slower pace of gross domestic product (GDP). In particular, rising COVID cases and complications caused by the enduring labor shortage led to some shocking situations. For example, the Governor of Massachusetts deployed the National Guard to drive school buses during a bus driver shortage, and many U.S. schools were closed leading to a drop of in-person learning. 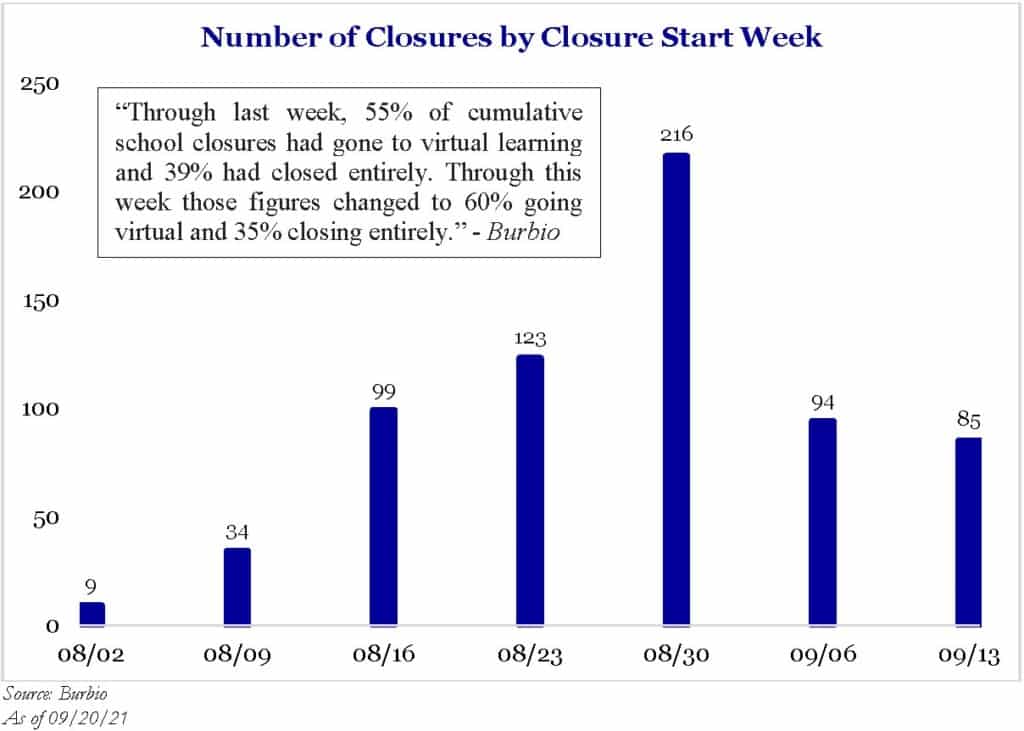 While we don’t know how the current wave of COVID cases will end, it’s clear the American economy has adjusted to dealing with pandemic protocols. Any subsequent waves that occur should have a dampened economic impact.

During the quarter, we heightened our exposure to international developed market equities. Our significant underweight position over the past few years has served our clients well. Owing to the favorable valuations seen abroad versus the U.S. which is nearly a 27% relative discount today, we’ve moved to a near-neutral position. 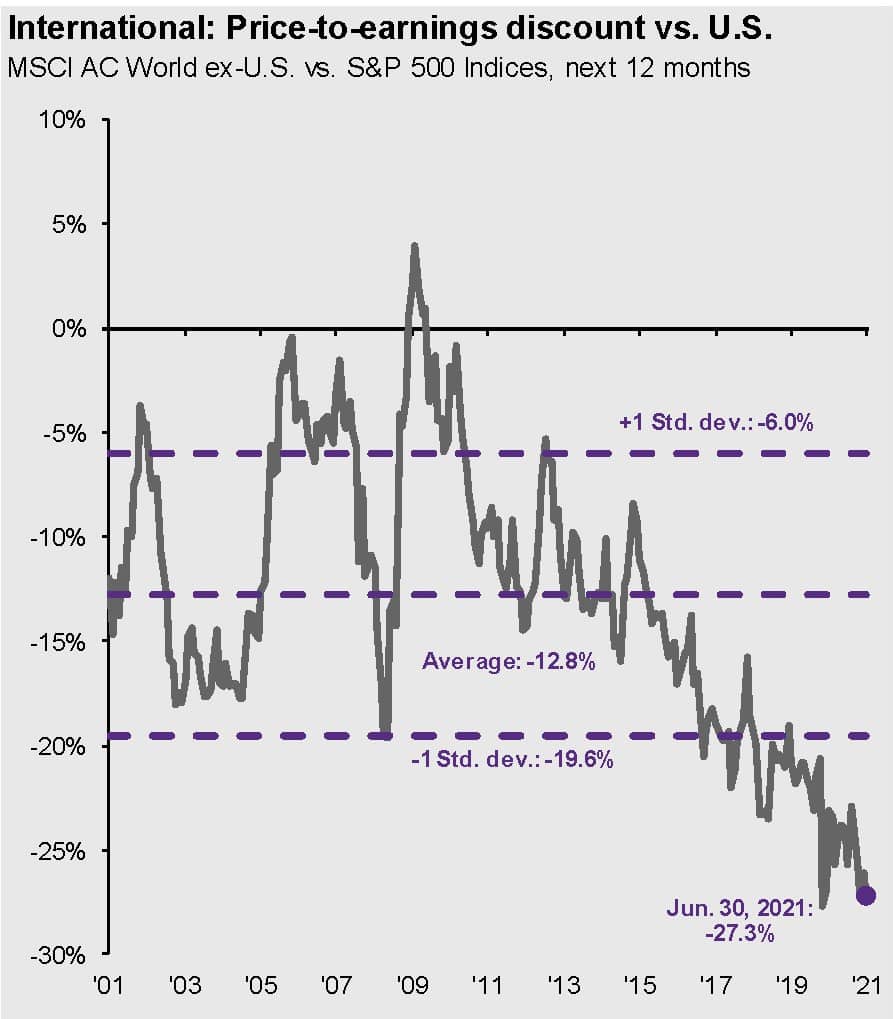 In the immediate future, despite tighter fiscal conditions and a gradual tightening in monetary policy from the Fed (in the form of tapering quantitative easing), we believe the environment will remain benign for equities.

Longer-term, several slow-moving factors concern us. While there’s been considerable discussion about women in the workforce, particularly around the disproportionate burden the pandemic has placed on women caring for children and elderly parents, the falling participation of men in the labor force has received little mention.

Since 1950, when approximately 86% of working-aged men (defined as those between the ages of 16 and 64) were productively employed, a steady structural decline of men in the labor force has occurred. In the decades that followed, male labor force participation fell to approximately 67%. Effectively, this means that nearly 30 million working-age men in America aren’t working. Conversely, over the same period, the participation rate of women has risen from 33% in 1950 to nearly 56% today. 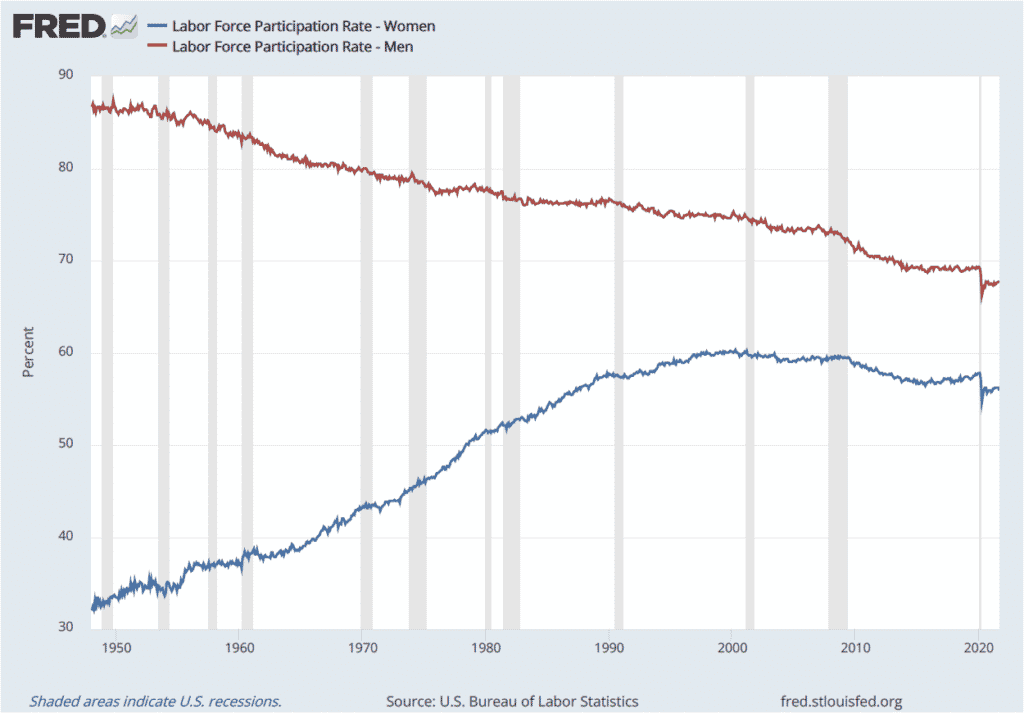 That is not to say that all 30 million non-working men are enduring financial hardship. Many are doing just fine. For example, many may be retired municipal workers, who generally have little economic incentive to work beyond age 60. Others may be entrepreneurs who have beneficially sold their companies or early retirees who cashed out and are enjoying the fruits of their labors. And many may also be stay-at-home dads, a choice that reflects evolving gender roles in our society.

There is certainly a darker side to consider as well. The opioid crisis that’s ravaged America, permeating urban and rural communities, shows no signs of abating. National overdose deaths are running 30% higher today than in 2019. Many engaged in the illegal drug trade are men; data shows that nearly 85% of those convicted of illegal drug dealing are male, with an average age of 34.

We share this data to show that our views on the risks faced by our nation — and the world — are grounded in reality. Our role as stewards of our clients’ assets puts us at the intersection of both macroeconomic forces and societal issues.  To protect and grow the assets you’ve entrusted us with, we must be attuned to these matters.

We Miss You and Hope to See You Soon

Since the publication of our last letter, a significant resurgence in the COVID Delta variant has limited our ability to resume “normal” office gatherings. We hope to reinstate these activities soon and will keep you apprised of our plans. As the holiday season approaches, we wish you and your loved ones good health and meaningful times spent together.