“Stability leads to instability. The more stable things become and the longer things are stable, the more unstable they will be when the crisis hits.”Hyman Minsky, American Economist (1919-1996)

Hyman Minsky proposed theories linking market fragility and the normal economic cycle with speculative bubbles innate to financial markets. He theorized that prolonged periods of stability breed complacency and lead to unpredictable behavior, which can worsen the eventual bust cycle. These periods are now known as “Minsky Moments.”

These days, words such as “unprecedented” or “extraordinary” seem overused in our daily vernacular, however, they do feel appropriate when describing 2022. Several events, including those listed below, defined the year, interrupting long-held expectations and disrupting deep-rooted stability akin to those described by Minsky.

After three consecutive quarters of simultaneous losses in both equity and fixed income markets, investors received a reprieve during the fourth quarter. However, the gains weren’t enough to climb out of the deep drawdown inflicted by prior losses, as shown by the one-year return data in Figure 1, below.

For a longer-term perspective on market returns, Figure 1 also depicts the past three years of returns on an annualized basis. The two-front assault faced by traditional 60% equity and 40% fixed income (60/40) portfolios in 2022 was one of the most severe on record, and the worst seen in many years. Under more normalized circumstances, bond and equity returns do not correlate. Generally, this is due to market participants seeking the relative safety of bonds during equity bear market periods. However, because the Fed tightened rates so swiftly in 2022, bond investors incurred losses for the year. As a result, this normally stabilizing counterbalance, instead contributed to additional portfolio losses.

Observing data over periods more relevant financially for long-term investors reminds us of the importance of building diverse portfolios. While we can’t predict which asset class will perform best during specific time periods, we do know that a diversified portfolio will generate more favorable risk-adjusted returns over the long term.

Views and Investment Themes for 2023 and Beyond

While the ability to predict market moves in the near term isn’t possible for anyone, we are able to identify themes that present risks and opportunities. These views help us determine how to tactically shape and allocate our clients’ portfolios.

The world is moving into a period where national security is taking precedence over economic growth. This trend is clearly evidenced in the United States by the passage of the Chips and Science Act in August 2022, a policy that advances domestic manufacturing of semiconductors. Surprisingly, both sides of the political aisle share common ground around this theme. The phenomenon is likely to play out over several years with various ramifications, including valuations.

The Cold War and post-Cold War periods offer interesting comparisons of these distinct orientations. As shown in Figure 3, below, from 1950 through 1989 (a period that was also less globalized and national interest and security were more heavily considered), equity valuations were expectedly lower. On the other hand, due to a greater trust among nations, the post-Iron Curtain period (1989-present*) resulted in more globalization and fostered increased economic prosperity.

* The Berlin Wall fell on November 9, 1989, and represented the beginning of the end of for the USSR. 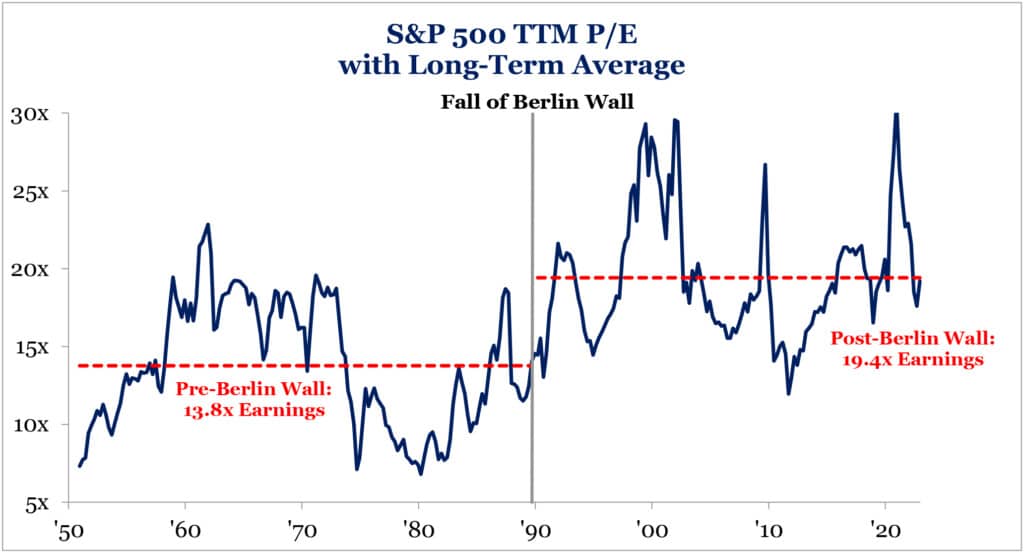 During quantitative easing (QE), where rates essentially sat at zero for nearly 14 years, savers looking for returns had no alternative but to buy riskier assets, such as equities. As we exit this period and enter a more normalized rate regime, we believe active management will outperform passive indexing. We saw this manifest in 2022 and we believe it’s the beginning of a multiyear trend.

As shown in Figure 3, below, quantitative easing rendered active management less effective. As a result of a normalization of monetary policy and thus a return to a real cost of capital, there will be a greater dichotomy between winners and losers. Specifically, we think a focus on fundamentals and valuation will be a stronger determining factor in generating greater risk-adjusted returns. 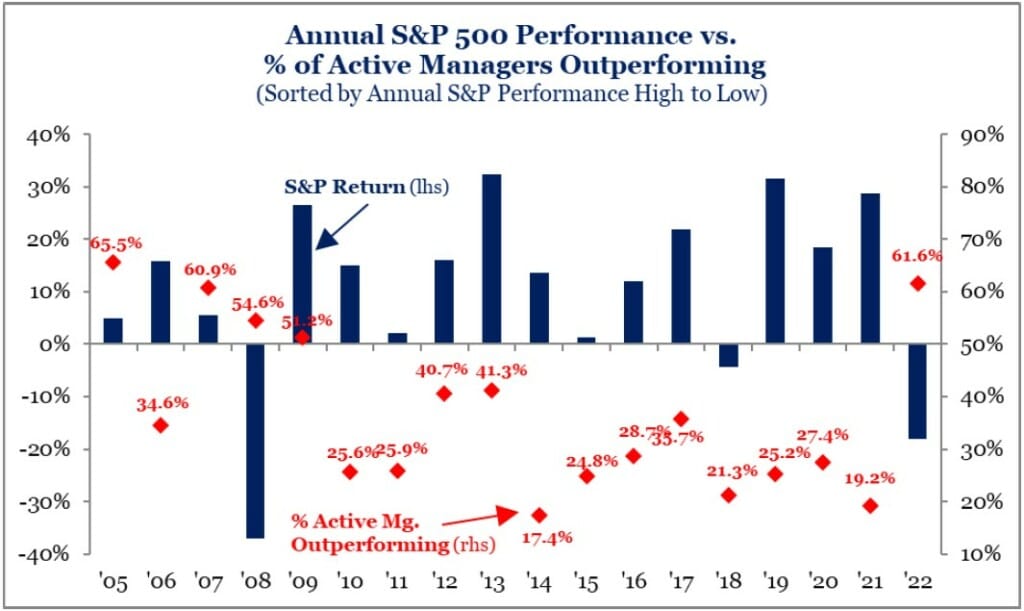 Due to the rapid tightening of monetary policy and its chilling effect on economic growth, an economic recession is likely in 2023. At this point, the recession call is a consensus assessment, and thus likely baked into most market participants’ expectations. We’re beginning to see ramifications of this view as some companies announce hiring freezes and layoffs. While investors need to be aware of this factor, we don’t think it’s the most important element for them to be attuned to. Instead, they should be more focused on how markets function as forward-looking discounting mechanisms. So, while it is possible that asset prices dip further from current levels, it’s critical that investors not become more bearish in the face of lower prices. Instead, they should become more bullish.  Traditionally, markets bottom out prior to GDP. There’s no reason to believe this time will be different. Thus, the deteriorating economic news will get priced into securities prices long before they’re detected by various economic indicators or become press release headlines. While it might become more uncomfortable to own equities in a deteriorating economy, the risk/reward asymmetry will grow in the favor of risk takers.

The Beginning of the End

With clear signs that inflation is abating, the blistering pace of hikes implemented by the U.S. Federal Reserve, which began in March, are likely to end in the second quarter of this year. It’s important to note that desired effects generated by this tightening always occur on a lagged basis. As the debate around high inflation continues, we see reasons to be optimistic that the policy is working despite persistently high Consumer Price Index (CPI) prints.

We contend that CPI may not be the best real-time metric for measuring inflation changes. Owners’ equivalent rent (OER), the method used to measure CPI’s largest component, housing, calculates how much a property owner would pay in rental rates — not an estimated value of the property. Without delving deeply into its nuances, we’ll simply highlight that OER is a lagging indicator. The chart in Figure 4, below, depicts CPI rent data versus real-time rental rate data gathered by Zillow. 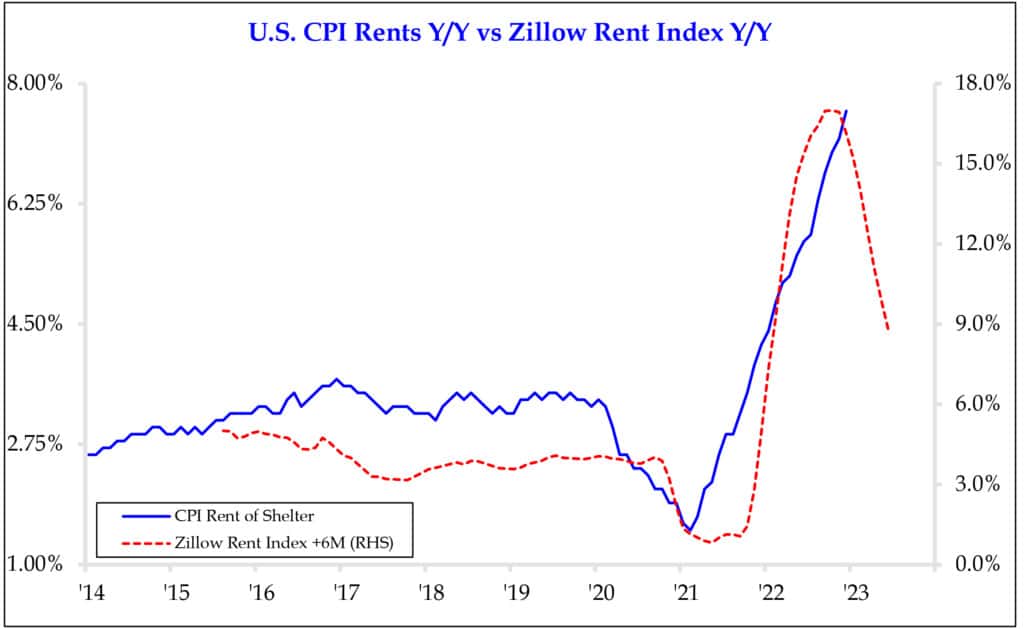 Further to our view that home price inflation and rent is abating, the US is seeing the largest percentage increase in multifamily units coming to market in 40 years (U.S. Census Bureau). This housing supply should significantly dampen rental price appreciation. Other signs that corroborate our view that rate hikes have begun to quell high inflation are falling used car prices, commodity prices, and abating wage inflation pressures. All of these factors foreshadow falling inflation, indicating we’re closer to the end of this hiking cycle.

These themes and views have helped us formulate our current tactical market views, which are expressed in Figure 5, below. Note: FineMark client portfolios are customized to suit each unique financial situation; therefore, these views may not be implemented in every portfolio in the same way.

Looking back on the past year, we find many reasons to express our gratitude. We’re grateful for the dedication and resilience our associates have shown in the face of adversity.

We’re grateful to you, our wonderful clients, for allowing us to be the stewards of your wealth. We hold this duty sacrosanct and are humbled by your continued trust in our ability to grow and safeguard your financial assets. Although we experienced our fair share of “Minsky Moments” in 2022, we’re hopeful that the New Year will bring a more positive outcome for all.

Articles In This Issue:

How Secure Act 2.0 Could Impact your Retirement Plans and IRAs